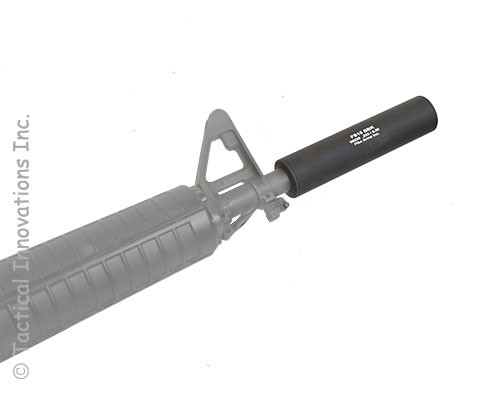 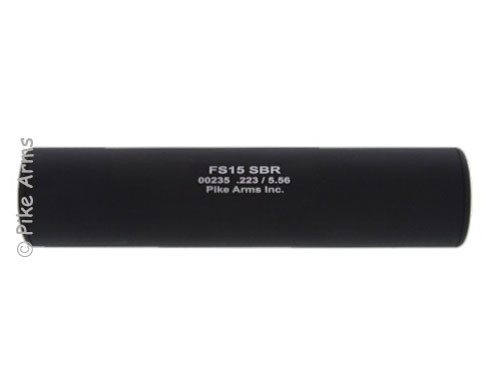 Our  AR15/M16 SBR "SHORT BARREL RIFLE" FAKE SUPPRESSOR gives your 16" or 20" .750 AR15 threaded barrel the SBR with a suppressor look and feel without all the paperwork hassle and transfer tax expenses.  Its as close to a real suppressor as you can get without paying the tax stamp!

This SBR "SHORT BARREL RIFLE" FAKE SUPPRESSOR will only fit on 5.56 /.223 AR15's that have a .750 diameter "heavy barrel" that is threaded 1/2-28 and has a minimum of FIVE INCHES of exposed barrel from the very end of the barrel to and any obstructions, such as the gas block or the front sight base etc.  Since this "SBR" fake suppressor telescopes over the barrel for the Short Barrel Rifle appearance, the overall length of the rifle is only increased by approximately one half of an inch (assuming approx .625 of threads).

Since its a fake suppressor, the sound is not reduced and bullet impact is not changed. Although, many customers do prefer the weight and balance improvement that the suppressor provides. Its perfect for use on any AR15 with a .750 heavy barrel that is threaded 1/2x28 in place of the traditional flash hider.   Please refer to "Product Specifications" tab for complete specs to make sure this custom "SBR" appearance fake suppressor will fit your rifle.

Order today and get your gun lookin' right!

Of course the AR15 that is shown is for reference only and is not included.

By James Of Wyoming
I don't care how much crap you already have hanging all over your AR, this one makes it look like every AR should look. I've posted some pictures of min on the web and everyone thought I'd sprung for a shorty with a can on it, which is exactly what I wanted it to look like. And for $30 dollars, its the cheapest thing I have on my AR but also the most bad ass looking accessory of them all.
66 people found this helpful. Was this review helpful to you?
By David Of Alabama
I am overall very pleased with this product. It looks just like the real thing and feels like it too! There are just a couple small things I wish were different. I bought the fake suppressor that slides over my 16 inch ar barrel and hides a portion of it. I wish the end of the suppressor was even with the end of my barrel instead of there being a small gap showing the barrel inside the hole of the suppressor. I wish it had a flush hole like a real one to look even more realistic. I also wish it didn't have the white engraved writing on it because it doesn't line up where I would like it on my gun. That can easily be fixed with some paint though. I also want to clear something up for people. This is made for barrels that are .750 in diameter. I have the DPMS pencil barrel that is .642 diameter. I was worried that there might be too much space with the smaller barrel and it may move around. Well I am glad to say it doesn't and it is very solid once tightened and doesn't move at all. Plus you can barely see that the barrel is smaller diameter than the suppressor. Best bang for the buck mod hands down!!
33 people found this helpful. Was this review helpful to you?

3. Screw 5.56 /.223 FAKE SUPPRESSOR onto firearm's existing threaded barrel.  Hand tighten until securely seated on barrel.  Do not over-torque.  Use crush washer (not supplied) to position engraving to preferred orientation if desired.

3.  Remove lead and carbon from inside of 5.56 /.223 FAKE SUPPRESSOR using pistol cleaning bush and bore cleaner.