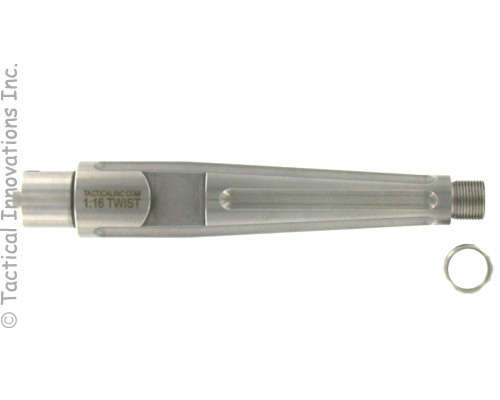 Tactical Innovations' FLUTED 5.5" STAINLESS STEEL THREADED BARREL WITH THREAD PROTECTOR is available on COHORT™ pistols or for any other 10/22® receiver based custom pistol build.  This FLUTED 5.5" STAINLESS STEEL THREADED BARREL is too short to be used on an ELITE22™ or CHARGER™ pistol without either a real suppressor or a muzzle accessory (such as a FAKE SUPPRESSOR) installed.  However, with a real or fake suppressor installed, the overall combined length of the barrel and suppressor remains close to the original length of the Charger™ factory barrel.

The barrel is CNC machined from US Certified stainless steel and is professionally threaded 1/2x28 TPI with .400 length of thread for mounting your suppressor or any other AR compatible accessory.  It comes complete with THREAD PROTECTOR included.

Although this barrel will physically fit on a 10/22® factory receiver, it is too short to legally be installed on a receiver that has previously been assembled as a rifle per ATF regulations. Installation of this barrel on a previously assembled rifle receiver (such as a 10/22® receiver) regardless of what configuration or stock it would not be assembled with, is a violation of federal law unless the receiver is first NFA registered as a Short Barrel Rifle. Contact your local ATF office for additional information regarding NFA regulations and registration requirements.

If you want to assemble a 10/22® based handgun, you must start with a "virgin" never before assembled receiver such as the CH22 RECEIVER or the ELITE22 RECEIVER.

Thank you for your purchase of a Pike Arms replacement barrel for Ruger 10/22® rifles and compatible receivers. Our barrels are made in the USA using modern CNC equipment to produce a barrel that will provide many years of functionality and pleasure. In order to prevent possible damage to your receiver or barrel, please review these assembly instructions and tips before attempting to assemble the barrel to your receiver.

The width of the bolt is critical for safe and reliable operation. Ruger® factory bolts that have been “polished” will often then be too thin from the polishing process removing metal and a slam fire condition is possible. Do not use a Ruger® factory bolt that has been “polished” or otherwise modified in any way. When assembling your rifle, ensure that the bolt that you use is wide enough to not allow the bolt to hit the rim and fire the round if the bolt is pushed all the way to either side of the receiver. The entire rim of the round should always be in the corresponding pocket of the bolt regardless of the left or right position of the bolt in the receiver.

In order for the rifle to successfully chamber the new round each time, the bolt face has to be smooth and have the correct geometry. Generally, a machined bolt will have a more uniform finish and geometry than a Ruger® factory cast bolt although cast bolts will work most of the time. The recoil spring has to have sufficient force to be able to drive the weight of the bolt forward and strip a round from the magazine. The magazine feedlips have to be designed to ensure that the feed angle will correctly present the round to the chamber. Plastic magazines often will wear out and the feed angle will change. Similarly, different brands of high capacity magazines will have different feed angle geometry resulting in one brand working well and another not working at all. In addition, the actual bullet shape of different brands of ammunition in high capacity magazines will change the feed angle relative to other brands of ammunition that have a different bullet profile. For testing, always use a Ruger® 10 round rotary magazine since the rounds are individually nested and are not stacked on top of each other.

The 10/22® rifle operates based on the blowback of the bolt by the brass when fired. In order for the rifle to function correctly, the recoil of the fired brass has to be greater than the combined resistance of (1) the weight of the bolt, (2) the force of the recoil spring (3) cocking the hammer and (4) the drag of the bolt on the receiver especially when new, dirty or not oiled. Different brands of ammunition, especially bulk ammunition, will have lighter recoil than ammunition such as CCI® MiniMags®. Similarly, ammunition can have different blowback force from one round to the next due to powder variations in the ammunition. As a result, if the fired round does not blow the bolt all the way rearward each time, you will experience failures to feed as well as failures to eject.

A stovepipe stoppage can also occur when the bolt does not blow back far enough / hard enough for the brass to strike the ejector with enough force to kick it out of the receiver, and instead it simply falls off the bolt into the receiver. To remedy this issue, you will have to either shoot hotter ammunition or reduce the recoil resistance as noted above, with the easiest option being to clip one or two coils off the recoil spring while continuing to test after clipping each coil.

Reliable function and operation requires that all parts successfully work together as intended. Many issues can be determined and resolved by substituting known non-issue Ruger® factory parts out of the assembly one at a time until the problematic part(s) are identified. Although the majority of rifle assemblies can be completed without any issues (especially when using either all Ruger® parts or all Pike Arms parts), you should seek competent professional gunsmithing assistance should you encounter a situation that exceeds your comfort or experience level. We are happy to perform a comprehensive measurement and quality check on any of our barrels but do not offer assembly or trouble shooting gunsmithing services.